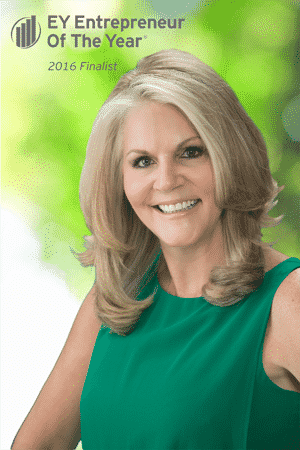 Michelle Fee, CEO of Cruise Planners, was a national finalist at EY Entrepreneur Of The Year® Awards

Fee was one of only a few women honored at the national level, which recognizes entrepreneurs from around the nation who demonstrate excellence and extraordinary success in innovation, financial performance and personal commitment to their businesses and communities. This year, J.W. “Bill” Marriott of Marriott International, was named EY’s Entrepreneur of the Year National Overall Award winner.

“Being a finalist on the national stage for the Entrepreneur of the Year – and in the same category as hotel pioneer Bill Marriott Jr. – is quite an honor,” said Michelle Fee, CEO and co-founder of Cruise Planners, an American Express Travel Representative. “After attending the Strategic Growth Forum, I am invigorated to share all that I learned with our franchise owners and inspire them to continue building their businesses.”

Fee uses a hands-on approach as a franchisor and her management style has paid off. She is accessible to franchise owners, travel industry partners and the growing Home Office Team. She is a true visionary who combines natural leadership skills with a competitive spirit, pushing her to continually innovate, while maintaining a personal commitment to make the world a better place. Through the company’s CP Cares philanthropic initiative, Cruise Planners has raised and donated more than $1 million to charities during the past few years. Fee was even honored as Woman of the Year for the South Florida chapter of the Leukemia and Lymphoma Society because of her commitment to helping the community while positively impacting people’s lives.

“As salespeople, our travel agents need to focus on building relationships, and are constantly learning about the industry all while seeing the world,” Fee said. “We are always pushing the envelope and are motivated by our travel agents to design marketing and technology programs to help them prioritize growing their business instead of getting bogged down with back-end office work that comes with running a small business.”

By emphasizing constant innovation and creating the best technology tools in the home-based travel industry, Cruise Planners has cemented its role as the top home-based business. Fee, who started her career as a travel agent, knows what it takes to be successful and always draws on that foundation when creating programs to make it easier for travel agents to sell travel.

“Our Cruise Planners travel agents have robust websites, interactive mobile apps, both digital and print marketing campaigns and strategic promotions to really help them stand out from the competition,” Fee said. “Our legacy is being the best in the industry and I am honored that EY has recognized that effort.”

Now in its 30th year, EY has honored entrepreneurs whose ingenuity, spirit of innovation and discipline have propelled their companies’ success, invigorated their industries and benefited their communities. In June, Fee, represented her home state of Florida and won the EY Entrepreneur Of The Year® Award in Hospitality and Leisure.

About Cruise Planners, an American Express Travel Representative
Cruise Planners, an American Express Travel Representative, is the nation’s largest home-based travel agent franchise network in the travel industry. Cruise Planners operates a network of more than 1,400 franchise owners who independently book amazing vacation and travel experiences for their clients. The Florida-based Home Office Team positions franchise owners for success by providing innovative marketing, booking and lead-generating tools, as well as professional development and hands-on training with the industry’s top executives. The company continues to be lauded and has been named the No.1 Cruise Tour / Travel Agency by Entrepreneur magazine for 13 consecutive years. Cruise Planners was recently featured in Entrepreneur as one of the top 30 franchise innovators in technology, has been consistently named as one of the Top Women-Owned Businesses by the South Florida Business Journal, is listed on the Inc. 5000 list as one of the fastest-growing private companies in Americaand was recognized as one of the “Top Workplaces” by The Sun Sentinel.

Stay in Touch: Media can stay up-to-date with Cruise Planners by visiting our media room, following us on Twitter @Cruisitude or on Facebook. For additional information or to make reservations, vacationers should locate a travel advisor near them. For those interested in becoming a franchise owner, please visit our franchise site.